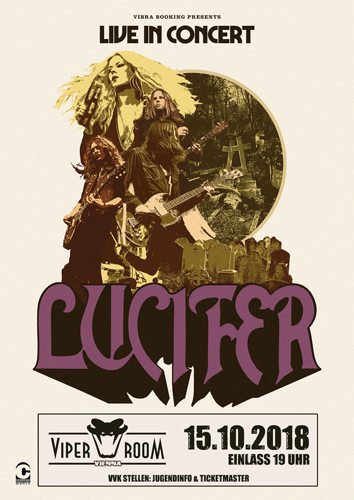 Berlin/London based heavy doom rock band, LUCIFER, immediately generated a significant buzz when they first descended onto the scene in early 2015 with their debut 7″ ‚Anubis‘, followed by their highly anticipated debut album, ‚Lucifer I‘, both released on Rise Above Records. The album single ‚Izrael‘ was released along with a haunting video directed by Sadonis and Chris Koll, partly shot at the bands first ever show in Berlin, has notched up nearly 150000 plays. Watch the video for Izrael here: https://www.youtube.com/watch?v=V7DipwzfPOM

Whilst The Oath was a much-celebrated band, following their premature demise, Sadonis wasted no time in creating a new beast to go beyond previous limitations.
Eschewing the now well-worn clichés of the ‘occult-rock explosion’ in favour of a truthful and tempestuous re-imagining of classic 70s proto-metal and heavy doom, the eight songs on this band’s debut album crackle and fizz with burgeoning energy and the compelling conviction of music made for all the right reasons.

Meanwhile LUCIFER has played nearly 70 shows, Roadburn among other festivals, a 21 date North American tour with High on Fire, followed by support slots for bands like Pentagram and a seven week long tour through out Europe as direct support to Paradise Lost in autumn 2015.

2016 started off with a headline show at Tokyo’s Club Quattro, Japan. The band is now working on their next album, ‚Lucifer II‘.