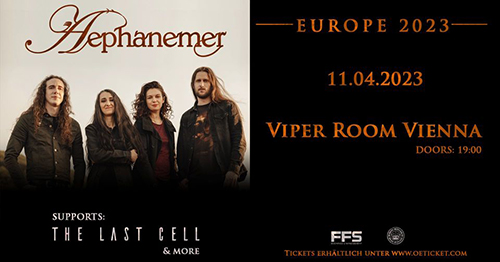 FFS Boo-Kings & Management pres.:
AEPHANEMER (Napalm Records) – THE LAST CELL & more
11.04.2023 – Viper Room Vienna
„For their first European headlining tour, Aephanemer (Melodic Death Metal, Napalm Records) will play a unique concert on April 11th 2023 at Viper Room Vienna. They will be accompanied by The Last Cell & more.
Integrating elements of melodic death metal, classical symphonies and slavic traditional music, the southern French band Aephanemer have developed a sound that could likely influence a whole new generation of metal.
After bursting onto the metal scene in 2014, the quartet quickly established themselves as one of the most promising bands in the new wave of melodic death metal.
Due in part to their deft musicality, impressive live performances (including at festivals like Wacken Open Air) and fresh modern sound, the band quickly gained the attention of leading rock and metal label Napalm Records, who re-released Aephanemer’s sophomore album Prokopton in October 2019.
With the release of their third album, A Dream of Wilderness, mixed by Dan Swanö and mastered by Mika Jussila from the prestigious Finnvox Studios, Aephanemer intends to establish themselves as one of the leaders of symphonic melodic death metal.
www.facebook.com/Aephanemer
https://linktr.ee/aephanemer
Supports:
THE LAST CELL (AT)
Guitar wizard Jean-Marc Perc, based in Vienna / Austria has been releasing instrumental progressive music under the alias ‚The Last Cell‘ since 2018.
Inspired by other progressive bands such as Animals As Leaders, Plini and Scar Symmetry ,he released his debut EP ‚NAUTILUS‘ in March 2018.
After he found his own voice in the prog scene, Lukas Florian [Bass] and Robin Weber [Drums] joined him as his two stage members.
The Last Cell`s music is a mix of story telling melodies and hard hitting riffs accompanied by virtuosic solos. It takes you on a sonic rollercoaster, telling a story in a way you haven’t heard before.
The 4th EP is currently being recorded and will be released in early 2023. Therefore continuing telling the story about life, uncertainty and the end of it all, in a monumental way.
Long after humanity has died, the universe will start to fade into extinction until there is but one thing left –
THE LAST CELL
www.thelastcell.com
www.facebook.com/thelastcellmusic
Doors 19:00
Tickets: https://bit.ly/3FHYBZZ
www.oeticket.com
www.bookingsaustria.at
Ticket kaufen Facebook Event iCal