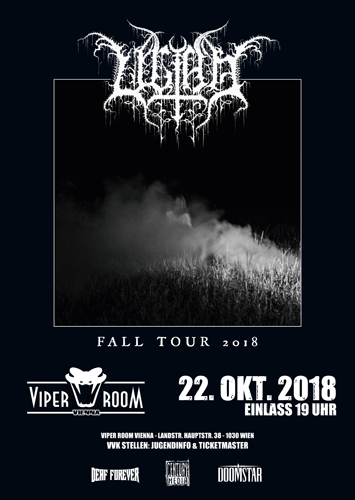 ULTHA is a five-piece Black Metal outfit from Cologne (Germany). The band started in early 2014 with a focus on writing contemporary Black Metal mainly influenced by USBM artists such as Weakling, Ash Borer, Leviathan and Xasthur.

All five bandmembers knew each other for long time, having played various shows together with their old bands. But coming from different parts of Germany the idea to start a band has always been impossible due to time and distance. By chance, all members moved to the further Cologne area in recent
years. Ultha was started as a project but with the withering of their old bands there was room to transgress Ultha to a fullfledged band. The alumni of former bands involve some of the most commonly known protagonists in German DIY metal, such as Planks, Goldust, Ira, Atka, Blindspot a.d, Battlesword, and Gorthauer’s Wrath etc.
After a two song rehearsal demo the band released its debut full-length ‚Pain Cleanses Every Doubt‘ in summer of 2015 on a variety of labels, earning praise from critics as fans alike. Their impressive and atmospheric live shows earned them the reputation as one of Germany’s most promising new bands. After a line-up change on second guitar Ultha will release a new EP as well as a second fulllength record in late 2016, both on Berlin based Vendetta Records.

Ultha are known for atmospheric and captivating songs, which often exceed the boundary of 10minutes, yet never failing to keep a listener hooked. Ultha’s approach is based on atmosphere, repetition as well as harmony, rather than just sheer brutality. In furthering and improving their songwriting the band incorporated more slower doom segments into their songs
and also the added electronics give the whole sound and live performance a very gloom atmosphere. The new material sees them blend styles between afore mentioned USBM acts like Ash Borer or Leviathan, perpetrators of innovative heaviness Neurosis and dark wave acts such as Field Of The Nephilim.