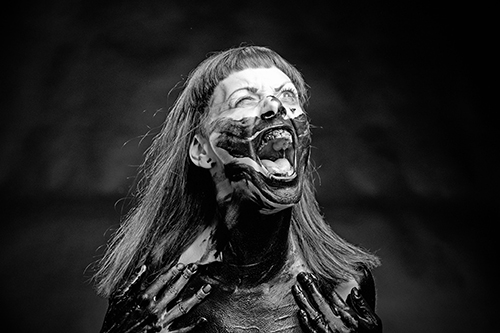 SVETLANAS
SVETLANAS have often been called „The Most Dangerous Band in the World” thanks to their super intense live performances at such international festivals as Vans Warped Tour (USA), South by Southwest (USA), Punk Rock Bowling (USA), Rebellion Festival (UK)
Extreme Fest (FR) and more.
While maintaining a 100% DIY attitude, the band has earned praise and respect from such punk and rock heavy hitters like Gene Simmons („Their music will be listened to by 40 millions of Americans.“), Jello Biafra („Olga has quite an unusual voice, kind of like an angry cornered mongoose.“) and The Adolescents, who they partnered with on a split release titled „Hot War“.
In 2015 the band teamed up with Blag Dahlia of The Dwarves for a 7″ split and an European tour that captured the attention of bass player Nick Oliveri (Queens Of The Stone Age, Kyuss, Mondo Generator, The Dwarves) who officially joined the lineup during
the recording sessions in 2016.
After a full month residency at the legendary Whisky a Go Go in Los Angeles, SVETLANAS put out their brand new album „This is Moscow Not LA“ , which was recorded at Josh Homme’s Pink Duck Studios.
Supports: Interessierte Bands – schreibt uns bitte an booking@viper-room.at
VVK bei Ticketmaster 15€ (exkl. Gebühren), AK 18€
Facebook Event iCal