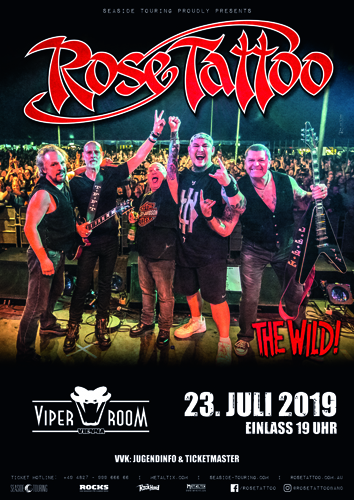 Rose Tattoo is an Australian rock and roll band, now led by Angry Anderson, that was formed in Sydney in 1976. Their sound is hard rockmixed with blues rock influences, with songs including „Bad Boy for Love“, „Rock ’n‘ Roll Outlaw“, „Nice Boys“, „We Can’t Be Beaten“ and „Scarred for Life“. Their first four albums were produced by Harry Vanda and George Young who also worked with AC/DC. They disbanded in 1987, subsequently reforming briefly in 1993 to support Guns N‘ Roses on an Australian tour. They reassembled again from 1998 and have since released two more studio albums.
According to Australian rock music historian Ian McFarlane, Rose Tattoo are „one of the most revered bands of all time. The Tatts played peerless, street-level heavy blues with the emphasis on slide guitar and strident lyric statements“. Guns N‘ Roses, L.A. Guns, Keel, Nashville Pussy, Motosierra, Pud Spuke Helen Schneider, and the Uruguayan band The Knight’s Night have covered Rose Tattoo songs. On 16 August 2006, they were inducted into the Australian Recording Industry Association (ARIA) Hall of Fame. Six former members have died in recent years including four of the original recording line-up, Dallas Royall (1991), Peter Wells (2006), Ian Rilen (2006), Mick Cocks (2009), and Lobby Loyde (2007), who was a member between October 1979 and September 1980, and Neil Smith (2013), who played bass temporarily prior to Loyde.

Shooting guns, setting fires and shaking shacks with half-stacks make for the type of nights that separate the men from the boys and THE WILD! from the other 99% of what some people are calling rock’n’roll these days. Anybody who’s ever been told to turn it down, clean it up or to go home lives inside of what the God Damn Wild Boys are all about. Driven by long, hard nights, the love of playing music, rural roots, and a no-bullshit mentality, THE WILD! play the soundtrack for freedom seeking renegades & real deal rock’n’rollers alike.