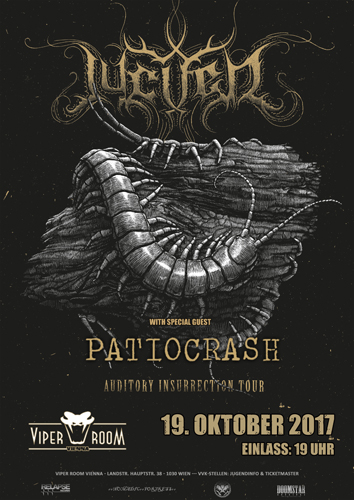 Jucifer, founded in Georgia in 1993, are pioneers of the metal two piece. They are notorious for their use of massive amplification, and for their entirely nomadic lifestyle. The band has been nomadic for two thirds of its 22 year existence.
Jucifer have stated that this homeless life was undertaken to facilitate playing „as many shows as we possibly can“. Their endless tour typically covers 20 or more countries each year. Jucifer literally has no „home base“ having spent all year, every year on the road since moving into their tour vehicle 15 years ago.
Unlike heavy duos which use loops, backing tracks, or triggers to fill out their live sound, Jucifer relies on compositions designed to decimate with only real-time drums and distorted guitar. And for sonic reinforcement, a wall of speakers that typically rises 10 feet high and sprawls 15 feet wide.Jucifer’s use of many different amps and cabinets to create a full-spectrum, full-body sound experience predates the 00’s ‚amp wall‘ trend.

As well as being originators of using stadium-appropriate amplification in clubs, Jucifer’s rationale for their gear differs from later bands‘ approach. Although Jucifer is renowned as one of the loudest bands in the world, both members have stated that volume is not their primary reason behind owning so much equipment, but rather a byproduct of their desire to be immersed in sound and of Valentine’s method to create her ideal tone. Guitarist Gazelle Amber Valentine has stated in interviews that she never turns her amps up all the way and that playing guitar through such a dynamic array of gear is „like building sound sculptures in the air“.

Jucifer shows are known for being extremely heavy and loud, blending elements of sludge, black metal, doom, death metal, powerviolence, thrash, crust, grind, drone, and noise with occasional psychedelic passages. The band has expressed distaste for conforming to a genre but has sometimes called themselves „deathdrone“ or „sludgethrashdoomgrind“. Confining description of Jucifer to a single genre would truly be misleading, as within their live show they incorporate aspects of almost every type of metal, and on albums have been known to veer from shoegaze to grindcore to doom and folk within one side of a single LP. Live performances are ritual and cathartic. Valentine and drummer Edgar Livengood possess a rapt intensity and physical abandon as they play. The drums are outsized and guitar is downtuned to various non-standard tunings, which lends an unexpectedly pleasing quality to the high volume employed.

Jucifer’s live sound has been compared to Celtic Frost, Melvins, Slayer, Black Sabbath, Necrophagia and Napalm Death, as well as bands of their own generation (Jesus Lizard, Darkthrone, Neurosis, Morbid Angel, Harvey Milk, Electric Wizard, Eyehategod, Acid King) and younger groups Lightning Bolt and Sunn0))). Because of their knack for odd compositions and onstage improvisation, some have also likened Jucifer shows to the work of Miles Davis and John Zorn.
Jucifer have performed steadily and released albums through the 90’s and 00’s on both major and indie labels as well as founding their own Nomadic Fortress label in 2010, distributed by Relapse. Their most recent releases are the two historical concept albums ‚District of Dystopia‘ and ‚за волгой для нас земли нет‘.