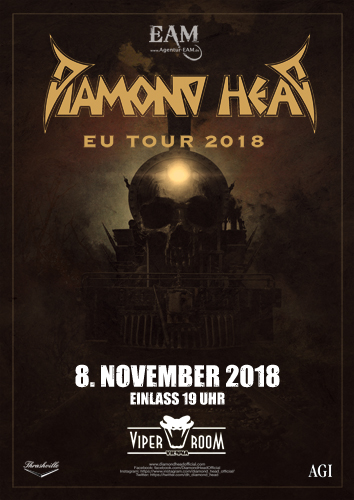 Diamond Head, the New Wave of British Heavy Metal legends will be embarking on a European Tour this October – November 2018.

Following the release of their self-titled new studio album in 2016 the band supported this release with extensive touring of the US, Canada, UK and EU which included festivals like Bang Your Head, Sweden Rock, Stormcrusher, Pyscho- Las Vegas, Leyendes Del Rock, Hard Rock Hell plus shows supporting Saxon. They have spent much of 2017 writing and preparing material for their next album to be released later this year.

Diamond Head were a major influence on bands like Metallica and Megadeth with Metallica covering four Diamond Head songs including the classic Am I Evil? Plus Helpless, The Prince and Its Electric. With a 40 year career and seven studio albums the band is still going strong and continuing to be creative.