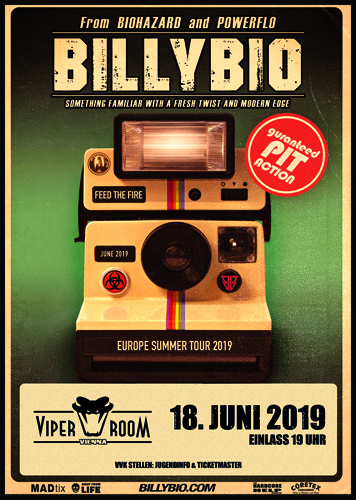 Immersing himself in the sounds, perspective, and culture of the punk underground, Billy’s desire to create new, innovative music led him to the late 80’s hardcore scene in New York City, from Sunday matinee hardcore shows at CBGB’s to Friday night metal shows at Brooklyn’s L’Amour metal/rock club. It was here that he found his musical home and it was here that Billy helped form a band that would take the metal/hardcore scene by storm. It was the birth of BIOHAZARD.
As one of the first bands they combined the urban sounds of hardcore, metal and rap with scorching lyrics describing the forces at work in our modern urban lives.

“I’ve always wanted to do a solo release and the timing of everything that I have been working on just seemed to fall in place. I always let the creative juices flow, I don’t try and restrict them to fit a certain genre. With BILLYBIO, it’s 100% me. No influence from anyone else. This is who I am and what I’ve become. I’m a product of everyone I’ve met, talked with, shared my stories with…and a bit of their stories as well. Anyone who’s a fan of what I’ve done, especially with BIOHAZARD, will love this! There’s something there for every fan of heavy underground music! I’m psyched to release my new music this fall
as BILLYBIO